U.S. Attorney General Eric Holder, federal judges from the state and Fourth Circuit Court of Appeals, members of the S.C. Supreme Court and a host of other dignitaries are scheduled to be on hand 2 p.m. Friday for the unveiling of a statue honoring the late J. Waties Waring.

The event, which is in the garden outside the Hollings Judicial Center near the Four Corners of Law downtown, is expected to be packed. Also on Friday is the unveiling of a special painting by Jonathan Green that commemorates the importance of Waring’s ruling in the Briggs v. Elliott civil rights case from Clarendon County. 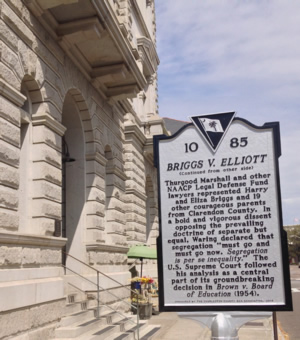 Waring (1880-1968) was an eighth-generation Charlestonian who became a social outcast for several moderate decisions that challenged government-backed segregation prevalent in the state more than 60 years ago. His civil rights legacy was documented first in recent years by Charleston Currents in 2012 and last month.

On June 21, 1951, Waring became the first federal judge since 1896 to challenge the “separate but equal” doctrine that propped up segregation as an everyday practice in the South. His dissent in the Briggs case became a backbone of the 1954 landmark Brown v. Board decision that upended segregation in public schools. Waring wrote:

“Segregation in education can never produce equality and that it is an evil that must be eradicated. … I am of the opinion that all of the legal guideposts, expert testimony, common sense and reason point unerringly to the conclusion that the system of segregation in education adopted and practiced in the State of South Carolina must go and must go now. Segregation is per se inequality.”

Waring retired soon after the Briggs case and, spurned by Charleston, moved into exile in New York City. He counted the head of the NAACP, Walter White, and writer Alan Paton as friends.

A few years after the Brown decision, Waring ran into Chief Justice Earl Warren, who pulled together a unanimous verdict in the Brown decision. Waring reportedly told Warren, “I was greatly relieved when you decided that Clarendon school case. I’d been very lonely up to that time.” Warren replied, “Well, you had to do it the hard way.”